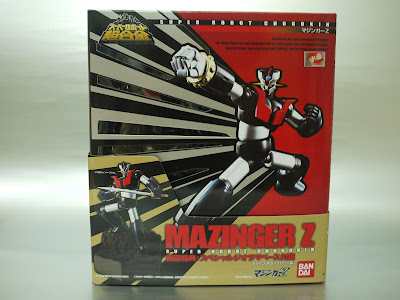 The lastest flagship by Bandai to offer collectors is the Super Robot Chogokin banking on the success of the Chogokin line. 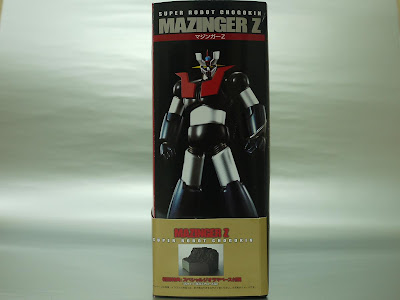 So, what's the big deal about this line? The answer is: It's smaller and more compact. Anyway, I did not collect any of the Mazinger Z from the Chogokin line and so naturally I plunged into this. The price of <$100 is another draw factor. 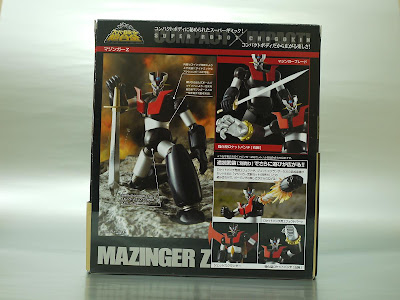 I have to confess that I am not too familiar with the story of Mazinger Z as I cannot remember if I ever watched the anime or read the manga (btw, the only manga I've read is Dragon Ball Z). 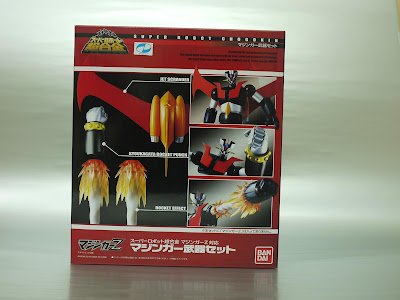 What would entice a collector who has one Mazinger Z too many is the weapon set (picture above) which is sold separately (<$20) which I will talk about later. 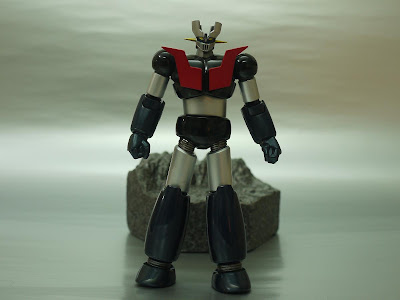 Let's start with the figure itself. Nothing new to any Mazinger Z collector but the details on this is a marvel given the size of about 14cm. Diecast content is largely at the lower torso but most of them are covered by plastic. CG of the figure is fantastic due to the heft of the lower body. 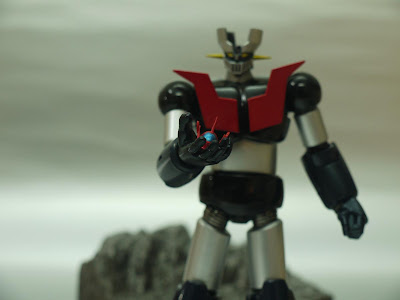 The Hover Pileder (pix above) comes with wings folded and thus, I wonder why is it not attached to the head? 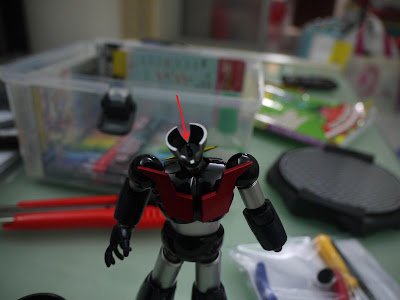 The only gripe I have about it is also the Hover Pileder as it will not sit properly on the head! See the pix above. I tried for some time and was so worried I will break something in the process. In the end, I decided to cut off the stud (pix above) 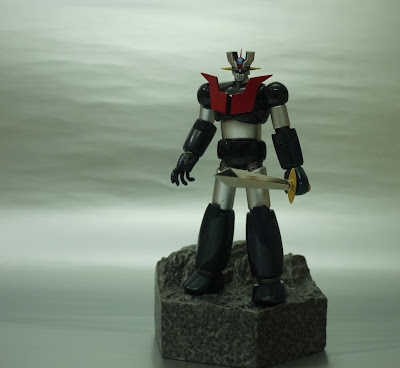 After much struggle, the pilot has full control of Mazinger!! In the package is this rock styled styrofoam slab for you to display the Mazinger. 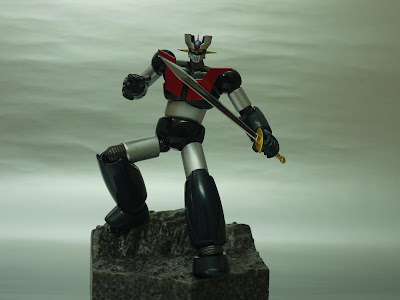 Articulation of the figure is another plus point as the figure can be posed quite nicely. However, the elbows and wrists do have some limitations. 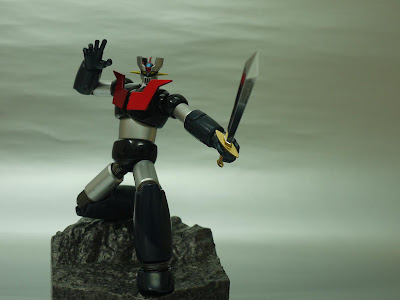 The display provided does provide a slight sense of "dioramaism" to the figure. 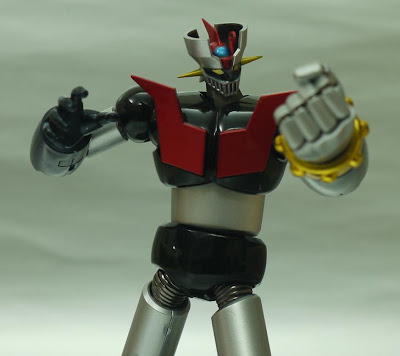 The standard packaging comes with this huge hand (forgot what it's called). 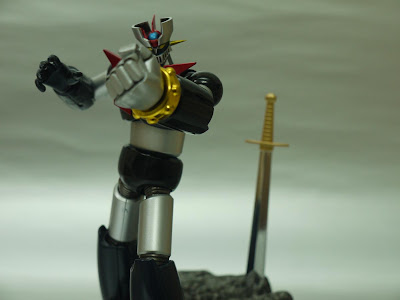 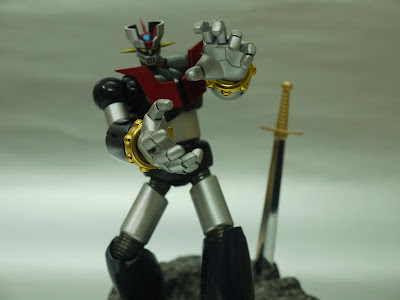 The weapon set comes with another and both comes with open and clench style. Sweet!! 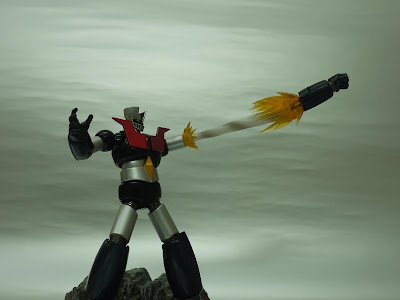 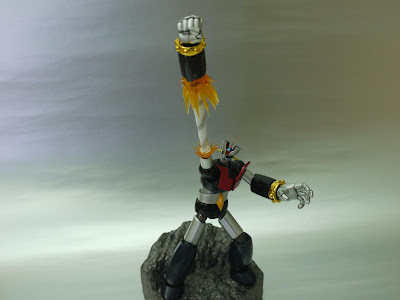 Another cool gimmick in the weapon set is the blast off effect for the rocket hands. The pix above has the belt in the correct orientation. 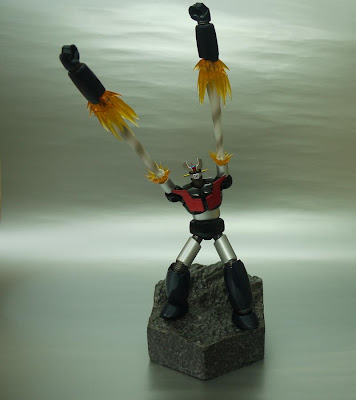 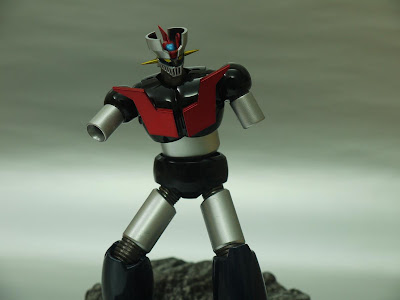 Oops, now how am I going to fight? 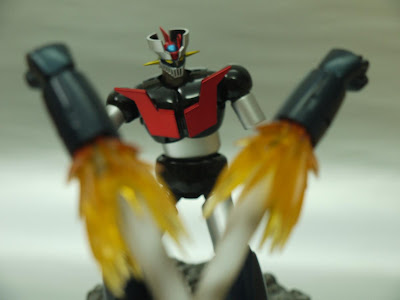 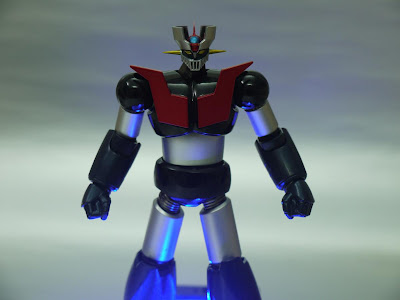 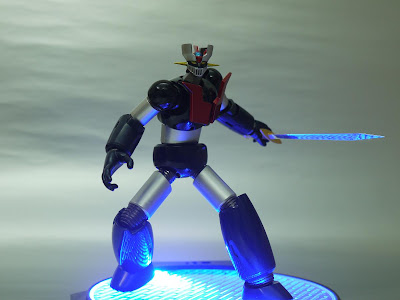 Used the Lightning Base from Gundam for the illuminatin effect.
Well, I will be looking forward for all the Mazinger releases under this line but not the Super Robot Wars ones as pictures shown so far tells me articulation is going to suffer.
Overall, this is a fantastic display piece and the simplicity yet detail production gives all the reason to buy  and hopefully, price will not increase over the years or months. 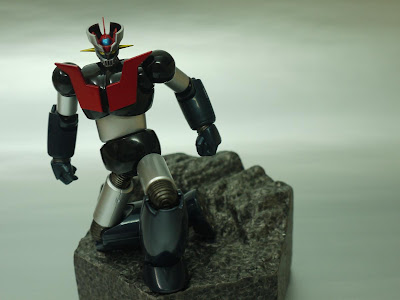 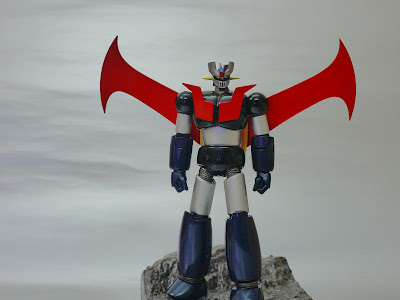 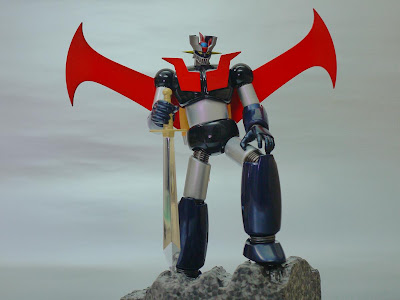 Added this pix to correct the mistakes made to the wings. This is really a fantastic figure and a definitely great display piece; a pity that it's really small.
Posted by Jonloh at 9:01 AM