and in the scale of 1:144.  Gunpla latest release is the Real Grade RX-78-2 under Bandai which in my opinion is a scale down version of a Perfect Grade (1:60). As of all Gunpla's various grades of Gundams; the iconic RX-78-2 being the first Gundam to make it to the tele is the initial release. This is also to mark the 30th anniversary of Gunpla which is followed by the 1:1 scale installation and display of RX-78-2 in Japan earlier last year. (link courtesy of fellow blogger Ngee Kiong) 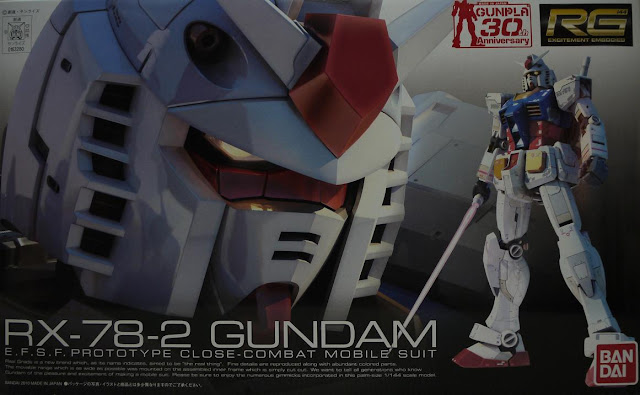 Bandai is taking this new grade of Gunpla into a whole new different dimension with the packaging. Gone are the artist impression of the Gundam in a flight or fighting pose. Instead it's a very classic feel of the actual product on black and the close up head of the actual 1:1 scale model. 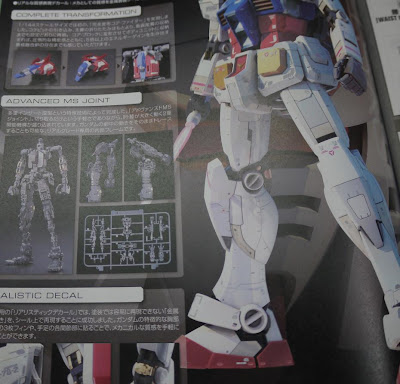 To justify my opinion that this is a scale down version of Perfect Grade (PG) is the internal frame of the Real Grade (RG) which can be found in PG. The fingers to my surprise have knuckle joints on the  thumb, index and a combined middle to pinky finger. 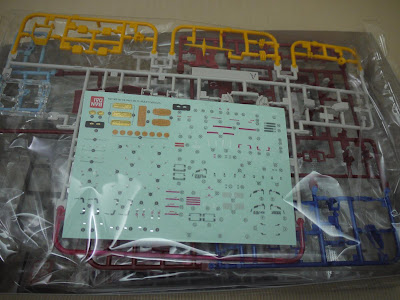 The main draw for me to purchase this for a trial has to be the decals provided but too bad they are not the water slide type. Approximately 200 of them to be applied if you want the model to look realistic. 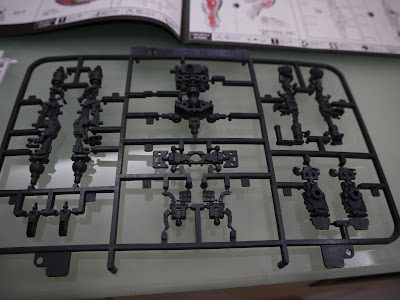 Here is the inner frame made of ABS PP material which is a mixture of flexible yet strong plastic. 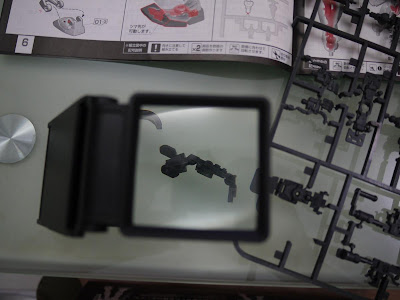 Another surprise is I presumed that in a PG, one will have to fix every single part of the frame. However, in the RG, they come pre-assembled. 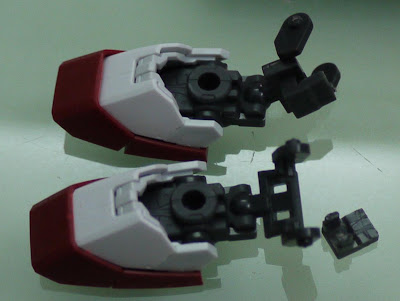 However, I do not understand the rational of having pegs at some parts which must to be removed and discard of as seen in the back of the feet here. That part if my interpretation is correct; it is useless. 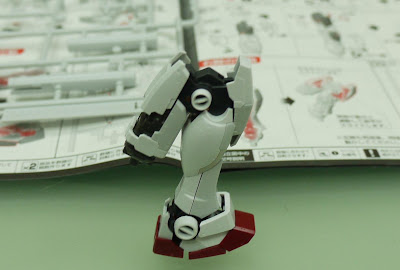 Another PG likeness is the articulation of the inner frame. Fantastic articulation for something of this scale. This may be a prolonged relationship in terms of my purchase but Gunpla needs to give me something I prefer; like 00 or at least Strike Gundam. 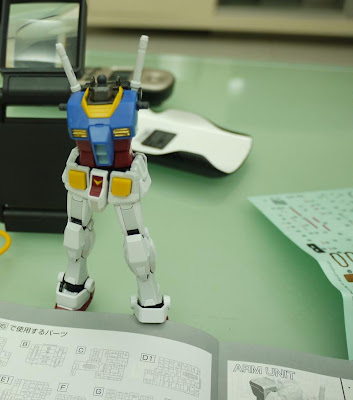 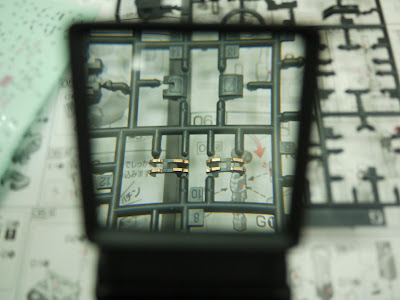 My gripe about the RG is again the decals. I still think Gunpla should provide the water slide ones instead. The decals provided are the adhesive types and it is really a pain in both eyes to get them in the right position. 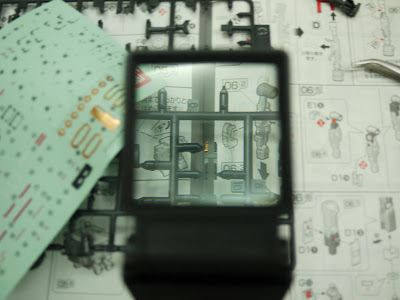 I decided to replace the copper colored decal with my Gundam Marker paint instead as it did not stay on very well. 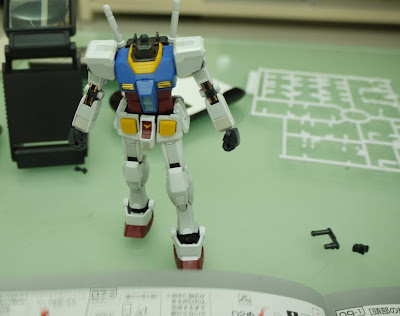 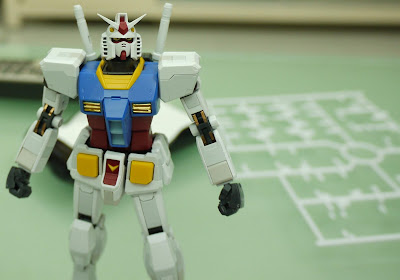 The figure is completed after spending about 15 hours with some decals applied (some very difficult places) and removed. 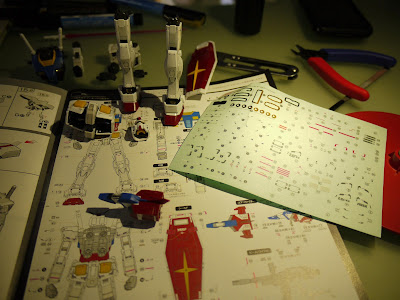 The final stage of decal applying started after panel lining and creating a bit of the weathering effect on the figure, the weapons and core fighter. A note here is that the core fighter is fully transformable and can be fitted inside RX-78-2; but I left it out. 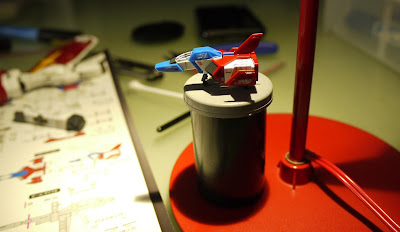 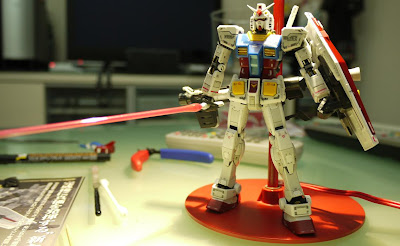 The decals really did the job in bringing the realism out in this figure and the additional 5 hours spent to apply almost all the decals was worth the time. I've chosen the Gunpla 30th anniversary scheme as seen on the shoulder and feet since this is to commemorate 30 years of milking model kit fanatics. 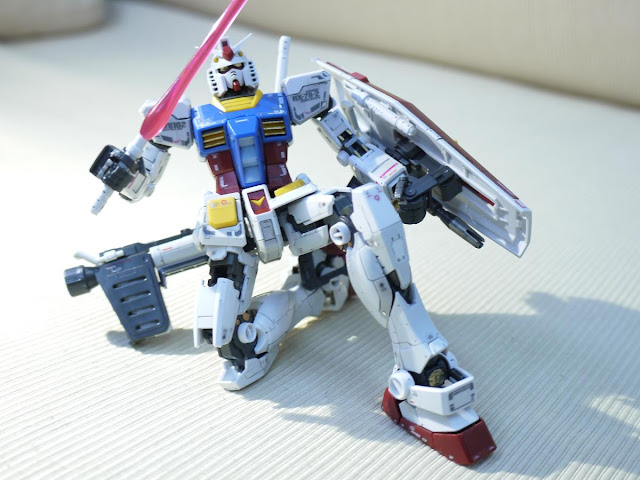 I'm glad I took the plunge into RG and although RX-78-2 is not my favorite (ironically I have many versions of it), I really appreciate the articulation and the realism this release provide.


I would strongly recommend this to all model kit builders as it is really worth the money and time spent.
Posted by Jonloh at 7:33 AM