for the pass few years have finally come to an end yesterday. Yamato finally answered my prayer for an improved version (at least in my opinion) of the VE-1 Elint Seeker. This is another 1/60 scale from Yamato which is a very nice size in terms of storage and display.

This could most probably be my final piece for Macross under the line of Yamato as all the collectible Valkyries that I like in the series have been released.

Let's start with the review on this piece then.

Packaging - 4/5
This is another standard 1/60 packaging with the standard box art similar to Low Vis which was reviewed previously. I gave this an additional 2 points for
1. The valk is in flight mode and this makes it look much aggressive
2. More features being shown at the back of the box

However, it would have scored a full 5 if there is a flap like the Super Ostrich. 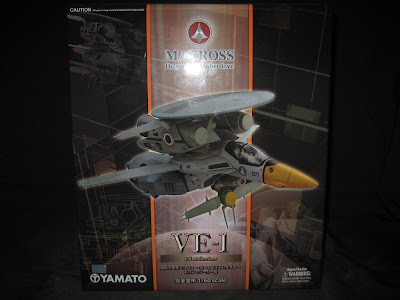 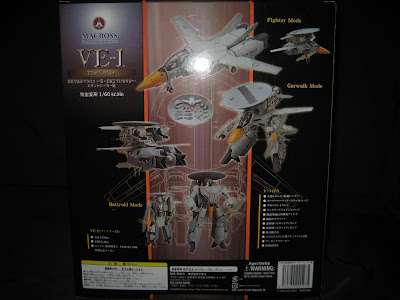 Back
The interior is also the standard Yamato plastic tray that houses everything neatly in place. There are two trays for the VE-1 due to the fast pack and Elint equipment. 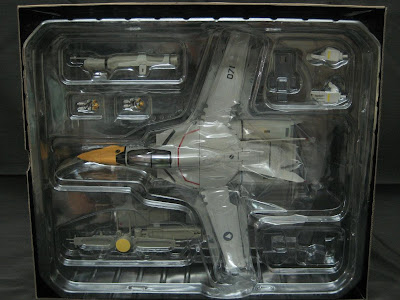 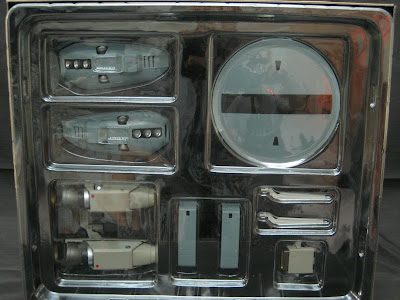 Tray 2 - Fast Pack and Elint Radar Dome
Yamato has put in considerable effort into protecting its product with plastic sheets at areas where there is a possibility of damage due to abrasion. 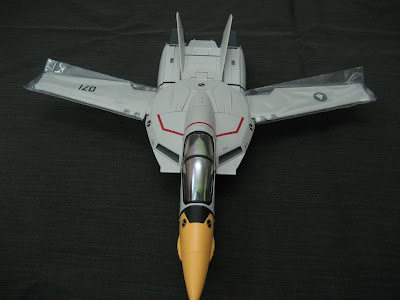 The wings are nicely wrapped 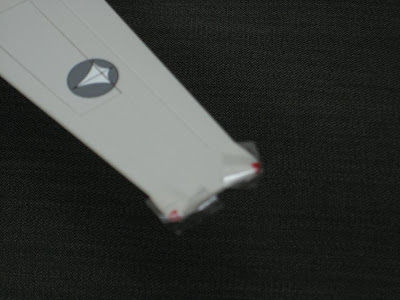 Tip of the wings has addition plastic sheets for further protection
The Toy - 5/5
This has got to be the best and I mean the BEST valks from Yamato in my possession. Although it is not as powerful as the rest in terms of firepower. In fact, it's not even armed but it's the kind of equipment it carries that makes it smart looking. 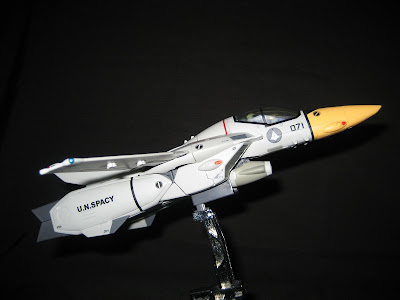 The basic valk without its fast pack and Elint equipment on is stylish with a light shade of grey and its yellow nose cone. There is a lot of pre-painted labels on the valk as well. Although slapping on the stickers would make it look even better. 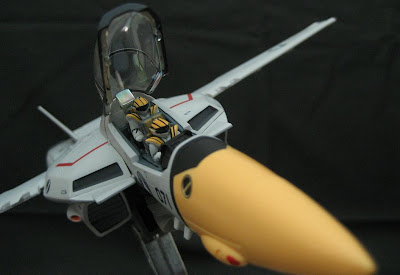 Cockpit seats 2, a pilot and a signaller 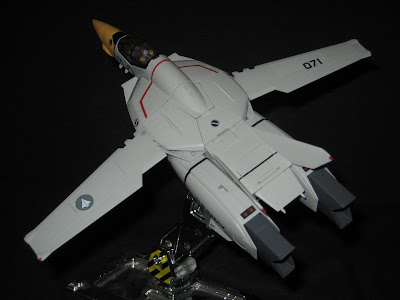 Topside of the valk

A point of caution here to all is to be VERY careful when fitting the parts onto the plane. Everything is made of solid plastic and the little spokes sticking out can be very brittle. 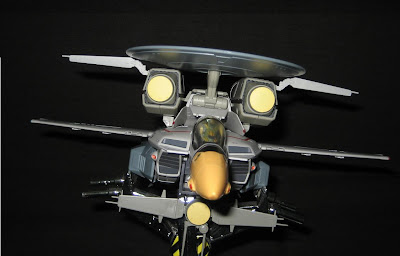 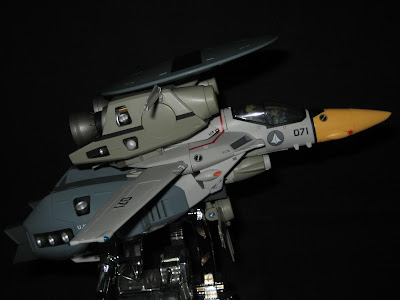 Side view with the fast pack 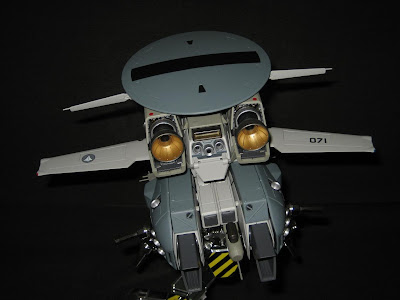 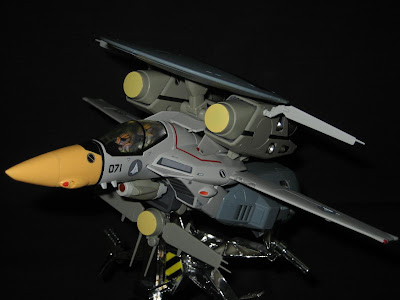 The colour combination is again very nicely coordinated which makes the VE-1 an eye candy. 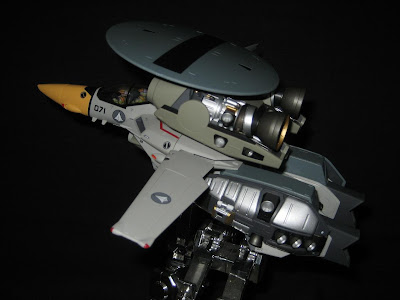 As of all fast pack, the covers can be removed to review the engines and mechanisms in it. This is a detail that I appreciate and best displayed in Fighter mode with the landing gears deployed. 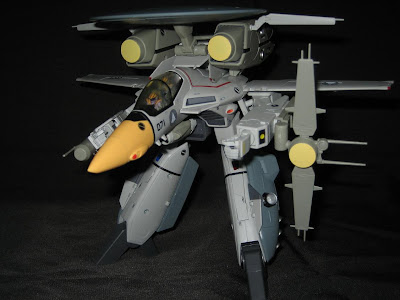 Gerwalk mode of VE-1 looks great with all the parts on and like all Yamato valks, CG is no issue. 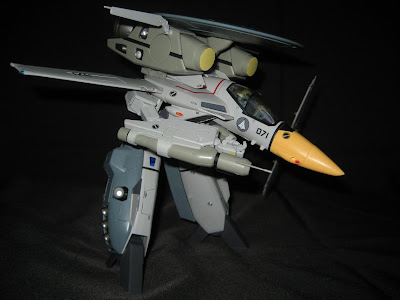 However, do take care with displaying and make sure it will not topple over as the spokes from Elint equipment may just snap off upon impact. 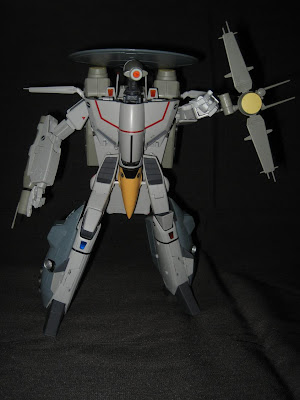 Finally the Battleroid mode which initially was not my favourite due to the odd looking head. However, it does look slightly better than the VT-1 Super Ostrich. 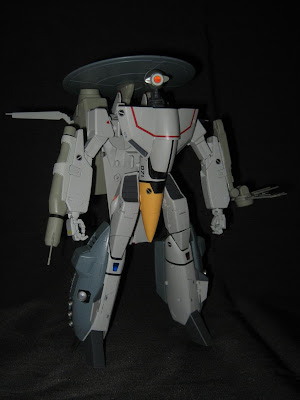 It does not look so odd after all with all the sophisticated equipment around it and thus, I credited it more with more shots. 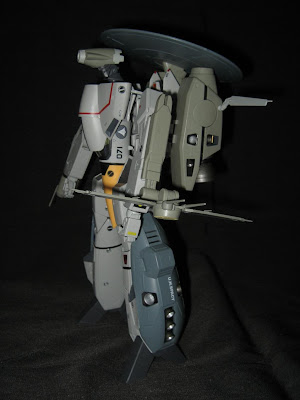 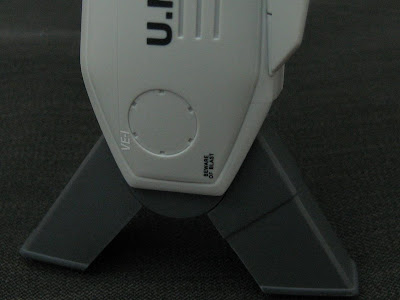 The details here are the prepainted labels (above) and the little catch (bottom) that holds the tail fin in place. 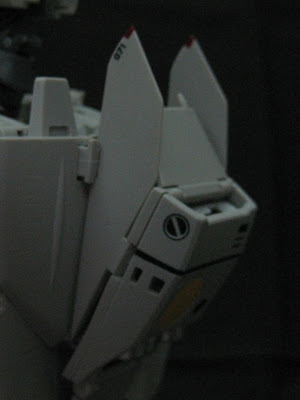 Overall - 4/5
This valk is not exactly the main cast of mechs in the Macross series but it is one of those that is not common like the VF-1. Yamato has really intended this piece for collectors with the materials chosen and the kind of the details included. In fact, it is stated on the box that this item is for age 15 and above and so, it has actually edged itself out of the toy category.
The reason why it is 1 point shy of a full score is a display stand would have been a great addition in the packaging. I think I'm spoilt by Bandai's packaging standards.
A must get for all Macross fans and it will not be around in the shops long enough for you to think about it.
Posted by Jonloh at 7:27 AM