is the latest offering from the Macross Frontier line of toys from Bandai. The Alto Saotome's EX Gear. I had always wanted to own a fully 'articulatable' or poseable character from Macross and this is what I have wanted it to be and even better. I shall give a full review on this fantastic toy. 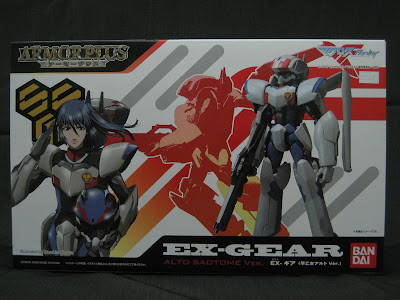 The box art in my opinion is a tad too old school for something that is of the year 2059. 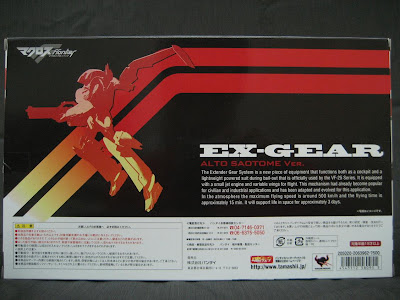 The back of the box sets the clock back back to the 80s. Then it occurred to me that Macross Frontier is after all celebrating 25 years of Macross. 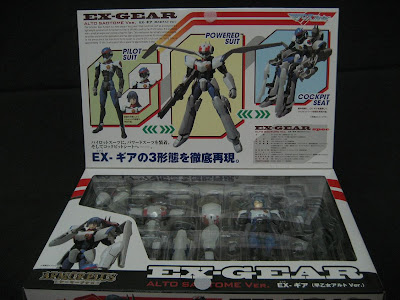 The packaging comes with a flap that opens to give a glimpse of the content and on the flap shows you what you can expect when you unpack it. Let's do just that. 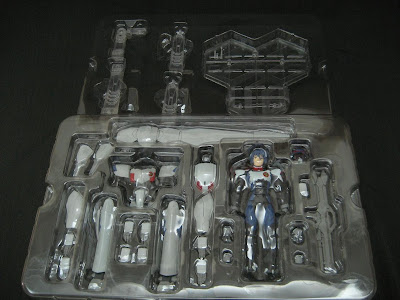 The question of whether a display stand is provided bothered me quite a while until I opened it. Was indeed delighted to see the crystal clear display stand with the S.M.S base. 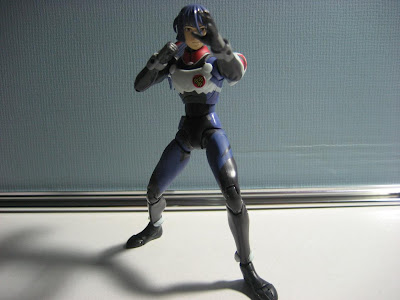 This is the basic figure of Alto Saotome, an accidental protagonist who became the pilot of Valkyrie Messiah VF-25F after the pilot was KIA right before Alto's eyes. 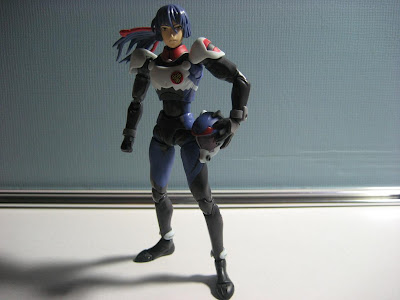 Alto Saotome (早乙女 アルト), a high school student in the Mihoshi Academy Pilot Training course. As a result of his fine features and long hair he is often mistaken for a girl at first glance, even receiving the nickname 'Hime' (Princess). 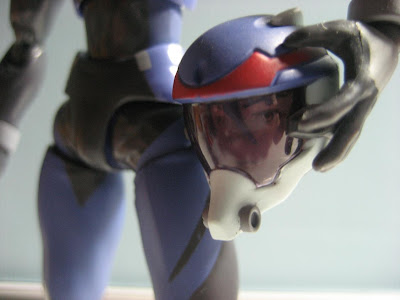 The helmet actually has Alto's head in it. Looks a bit freaky when you can look inside when it is detached from the head. 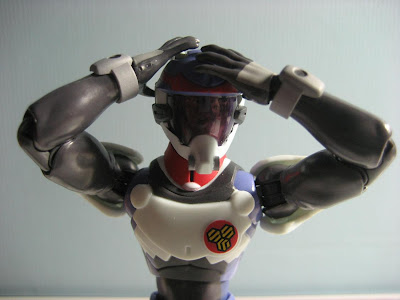 Articulation on this figure is pretty solid or do I mean liquid as it allows an array of combination of moves and poses. 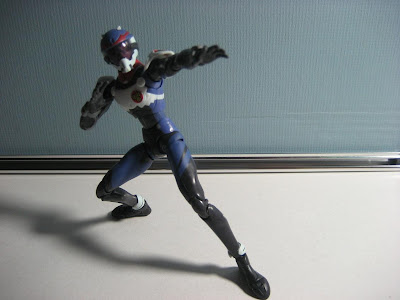 Another pose to show how poseable this figure is. There is basically ball joints everywhere. 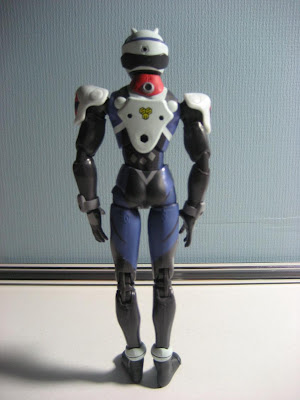 The figure is very well made and all details are not spared from making this toy as anime accurate as possible. 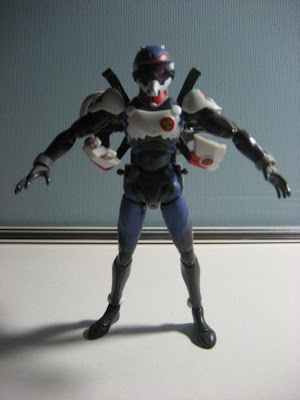 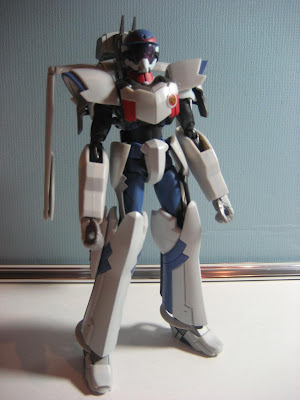 Fully armed and ready to take flight! The figure stand well without any stand. 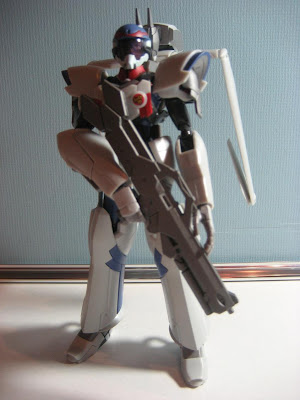 The standard weapon issue is the machine gun with grenade launcher and the survival knife is missing in the packaging (but who needs it anyway?) in fact, there's no need for the machine gun either. 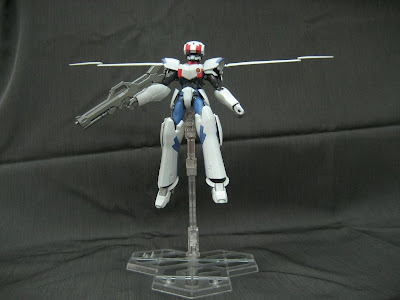 Take flight and the stand comes in handy to display the flight mode. 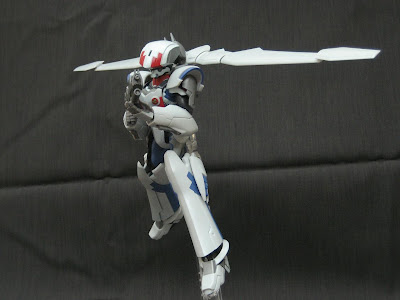 No, Alto is not getting his hair permed. It's the EX Gear headgear that mounts over the head. Guess it provides all the HUD and again, makes one to wonder.....isn't it 2059 and the helmet Alto is wearing doesn't come with HUD? 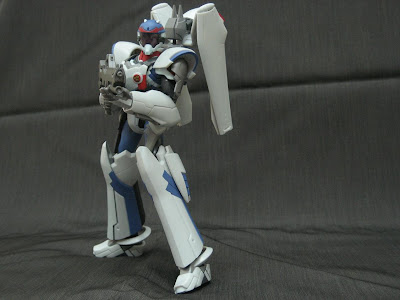 So, let's do without the headgear and display stand and do some shooting!! 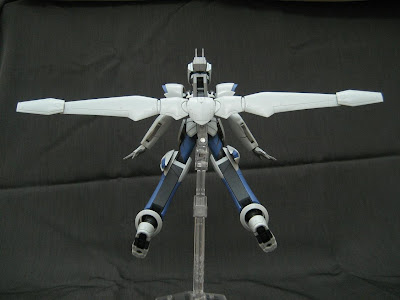 Flight mode (back view) the wings can be folded and position adjustable. 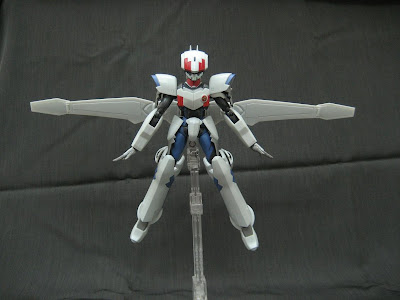 Front view. A pity the head cannot be tilted more to look up. 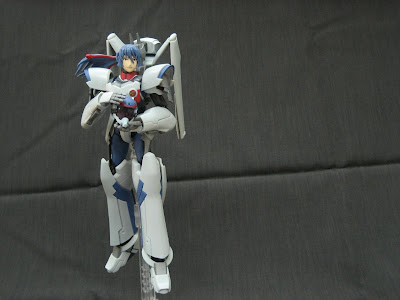 This figure has this appeal that allows many poses and it just look good with whatever pose one can think of. 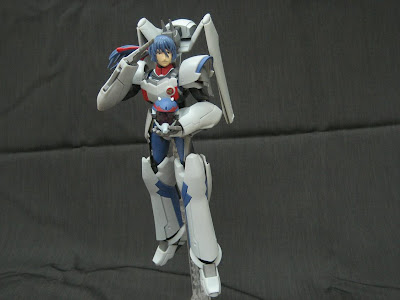 The classic salute pose while holding the helmet which is on the box art. A must pose for all macross figures. 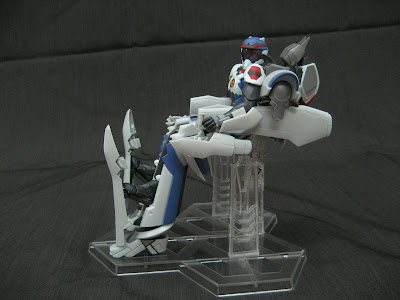 Ok, the best feature of this toy which is also the reason why I really want this so much. The EX Gear is in fact part of the cockpit and is a built-in feature in the Messiah type valkyries. 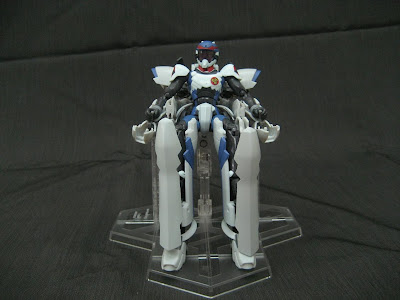 When in the cockpit mode, everything just fold and hide away nicely to ensure the pilot has full control of the valkyrie. Check out the controls on the hands and feet. 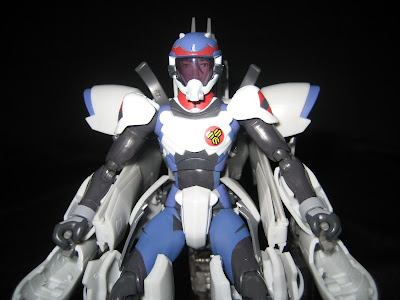 A close up of Alto's face in cockpit mode. 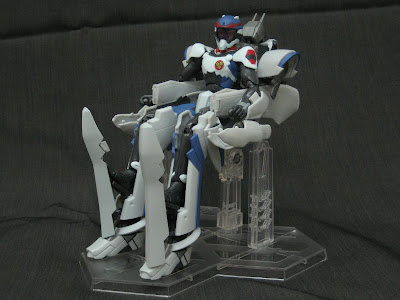 Actually, they must have gotten the idea from the dentist chair. 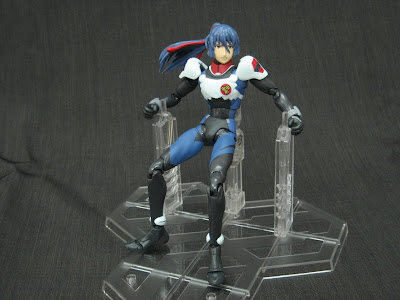 Ok, that is my review on the Alto Saotome's EX Gear and Alto here deserves a break.
The Good
1. Lots of fun factor with 3 modes available
2. Detailed and Poseable
3. Display stand provided for all modes
The Bad
1. Price
2. Parts can fall apart when fixing it up
3. Hands provided are not really useful
Overall, it is a good piece of toy to own and if you are into Macross Frontier, it is not to be missed and perhaps, owning this one piece is good enough. However, I shall not make a commitment so soon, as I am anticipating Ozma's version or even Mikhail's.
Posted by Jonloh at 1:50 AM

That is a very interesting figure and a detail review. Too bad some parts are not stable. How much did you get it for?

The parts are sturdy when you finalised a mode. Not too bad as compair to the valks under the DX line.