is the latest purchase of the Macross Frontier line of toys. This is simply the add on to the VF-25F Messiah valkyrie piloted by Alto Saotome. With this, I have completed everything that is of Alto

Now I'm glad I have 2 VF-25F; so I can display one with super parts while the other with armored parts. 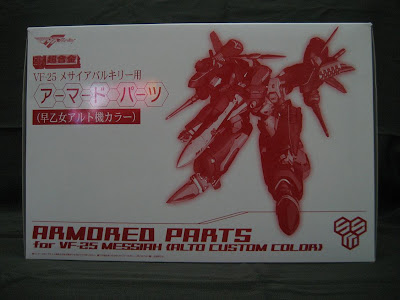 I like the box art in particular; it is the same color combination as with the super parts. The simple red graphics and text on white background. Gives it a clean yet sophisticated look. Choice of red is most probably that's Alto's custom color. Actually, it's more of Henry Gilliam's custom color as he is the original pilot who got killed.

Henry Gilliam (ヘンリー・ギリアム)
A tough pilot in the S.M.S. Skull Team and Ozma Lee's second in command. He lost his life in Episode 01 while defending the Macross Frontier fleet in the first Vajra attack of 2059. 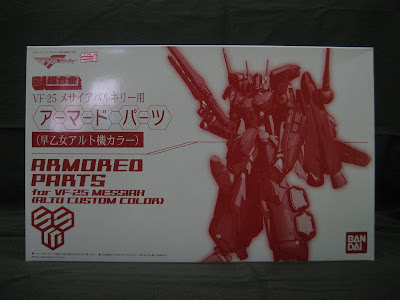 The rest of the box art shows all three modes. 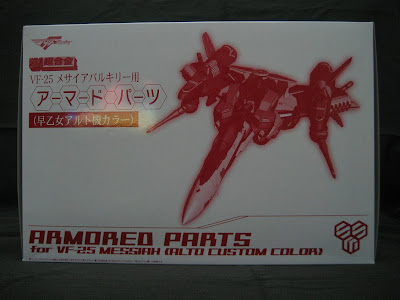 The box is surprising large, pardon for not providing dimension. It's like 4 boxes of the VF-25F stacked together. 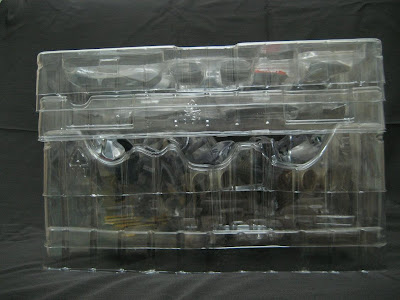 The inside comes with 4 plastic trays with all the armored parts neatly packed. 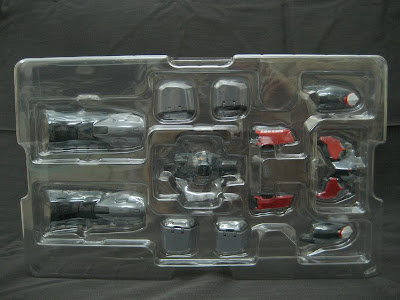 The good thing about Bandai is that they pack their stuff systematically, in sequence from head to toe and directionally from left to right as well. This is helpful as one can tell the left from the right easily and you can work on the parts in the right order. The trays above and below contain parts mainly for limps 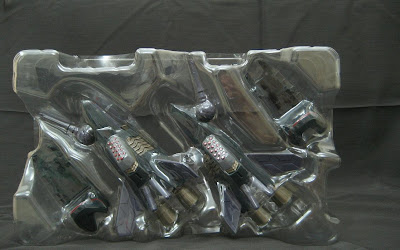 Actually, there are certain parts that I did not use in any of the modes and the instruction manual is in Japanese, so it's 'wakarimasen' for me. 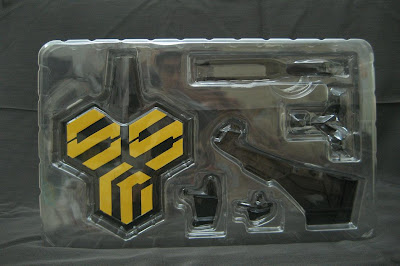 The last tray is the display stand and the SMS in yellow is customised by me. I'm puzzled why Bandai did not have it painted. 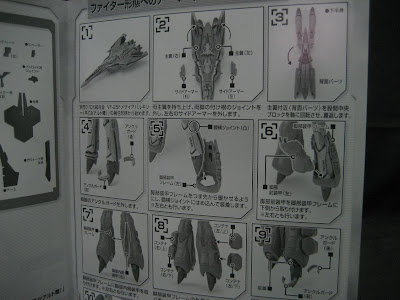 The instructional manual is the same one from Ozma's Armored VF-25S. Talk about being lazy! One part is missing here that was in Ozma's; the extension for the neck. However, Alto's VF-25F does not really need that extension. 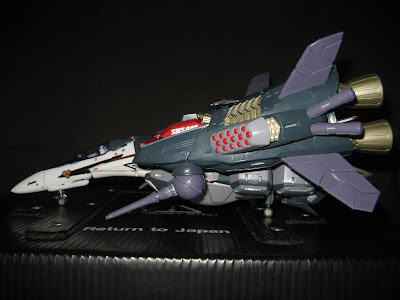 One issue I have with this is the landing gear. Yes, Shoji Kawamori is smart to include the landing gear in the leg armor but Bandai is sure lazy enough not to paint it to look less plastic. 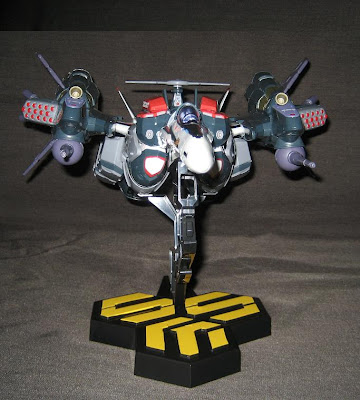 Fighter mode with the armor parts on. Heavy but the display stand distributed the weight very well. 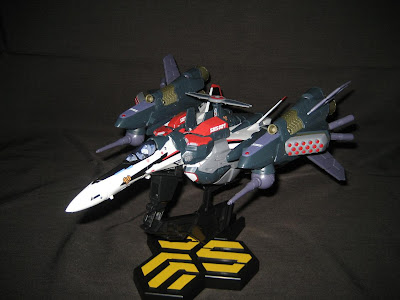 I personally prefer this color scheme over the Ozma one. 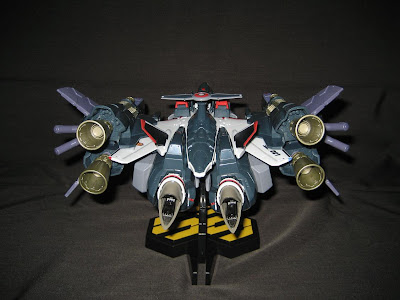 A picture from the back. Great engineering here to make everything fit in well. 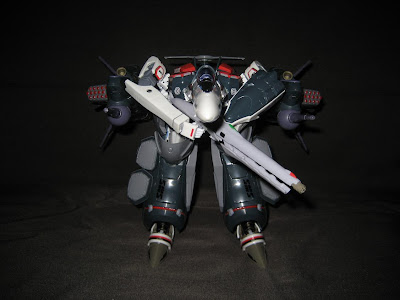 It was a nightmare getting Gerwalk mode right. The bulk on the leg sure makes things very difficult and after 30 minutes, I gave up the idea of displaying it on the stand. It basically self destruct the moment I let go and the attachment provided serves no purpose. 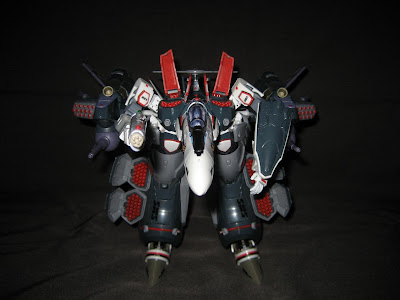 However, the consolation about this is that the figure stands well with or without the stand. 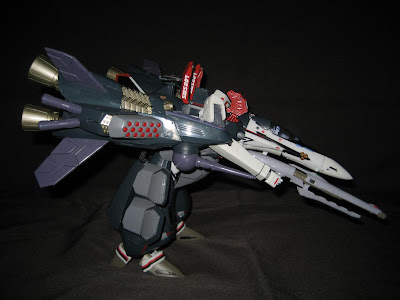 All pictures are taken with the figure standing on a couch so, I give it a 10 for being steady. 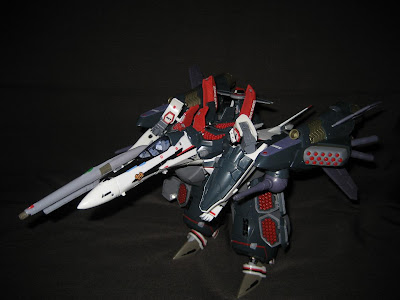 An elevated shot....can't get enough of shooting it to justify the time spent to get this mode right. 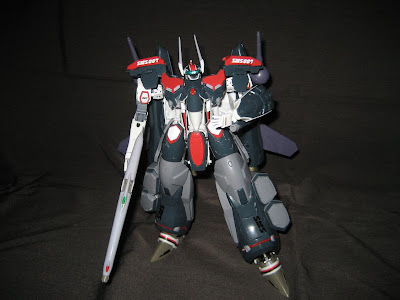 Ok, the best looking mode, Battleroid with the armor parts, It is paying homage to the GBP armor for VF type valkyries. 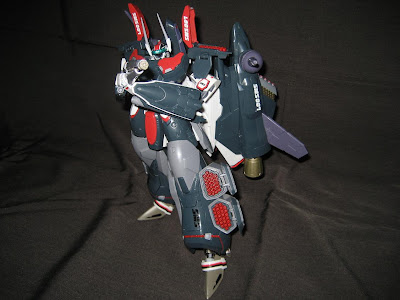 Heavily packed with tons of payload to take down any enemy. 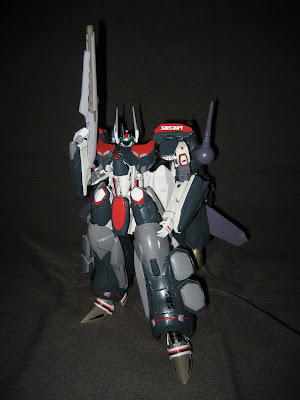 Alto did use Mikhail's SSL-9B Dragunov Anti-Armor Sniper Rifle in the series and it's a pity Bandai did not include that. So, it will just have to make do with it's standard issue. 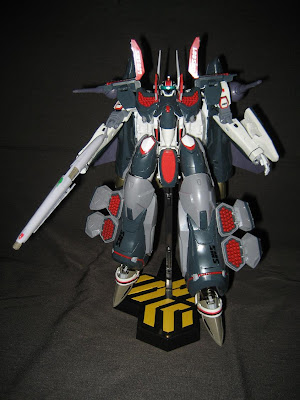 The missiles pods on the chest do have the same problem as the Ozma's one. Everything is in a single color. It will definitely looked better if they have 2 separate color as in the leg. 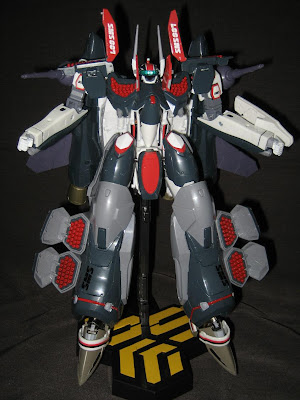 All missiles away!!
Well, the armored parts sure makes the plain looking VF-25F more menacing. However, it did not come cheap. Other than the price, the quality is as good as the Ozma's custom (of course it is because they are from the same mould).
In a nutshell,
Pros
Great color scheme
Good design in terms of moveable parts and details
Cons
Expensive
No improvement since Ozma custom
Let me conclude by saying, get this if you want to beef up your VF-25F and cannot wait. If not, patience will surely see a complete set in due time.
Posted by Jonloh at 1:56 AM

This rather valuable message