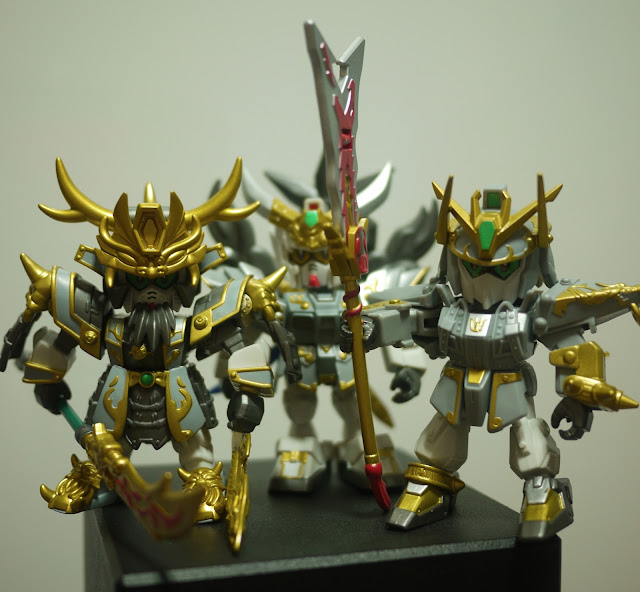 Bought these at OG Orchard as well at 3 for $10 and I managed to get hold of the three sworn brothers.
SD Gundam is never my cup of tea but I'm kinda obsessed with Guan Yu 關羽. He has this warrior aura with his huge blade, guan dao named Green Dragon Crescent Blade. So, since I wanted to get him, I needed the the other 2. 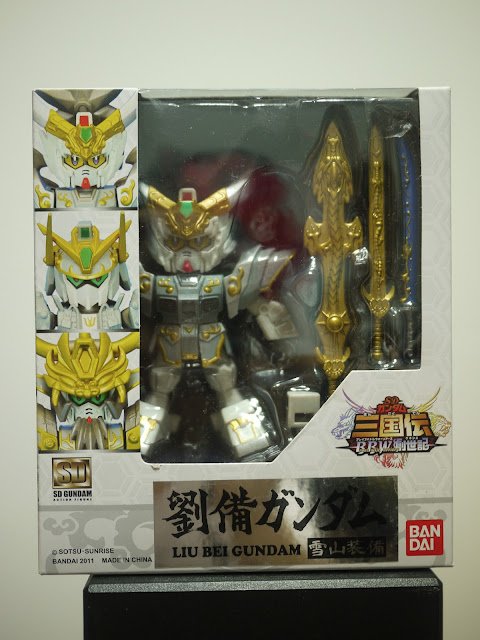 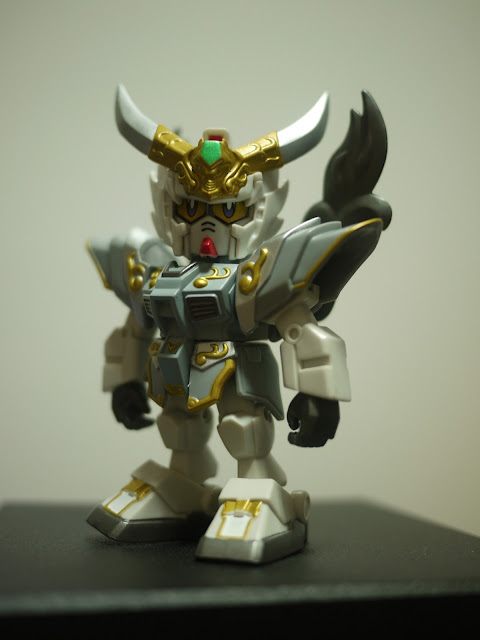 The successor of Ryuutei. A young samurai who is from the bloodline of the Ryuutei, who once ruled the whole Mirisha. He is born in Rousou Village (楼桑村) of Yuushuu (幽州) in northern Mirisha. He does not accept the evil, for justice he can stand against anyone without any fear, a man of men. His righteous spirit later gathered a number of warriors under his banner. A cheerful youth who is always caring to children. He looks up to his senior Kousonsan (Gongsun Zan). 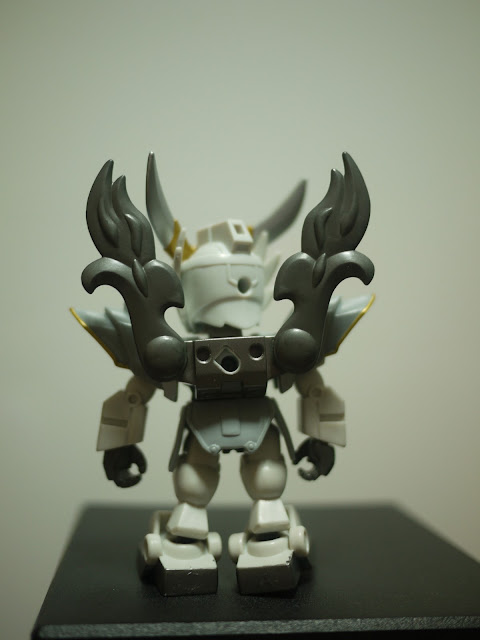 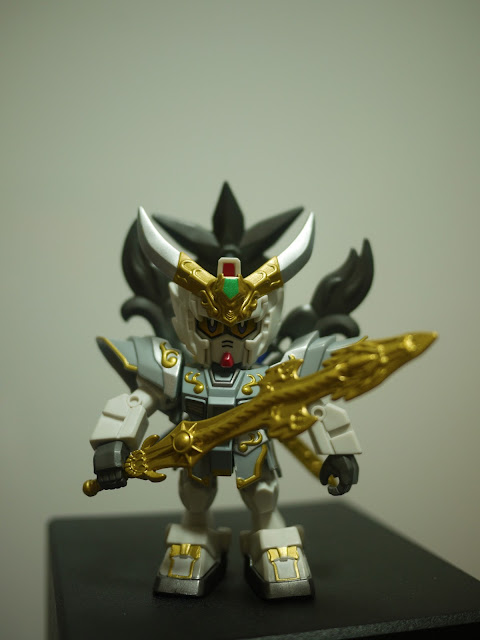 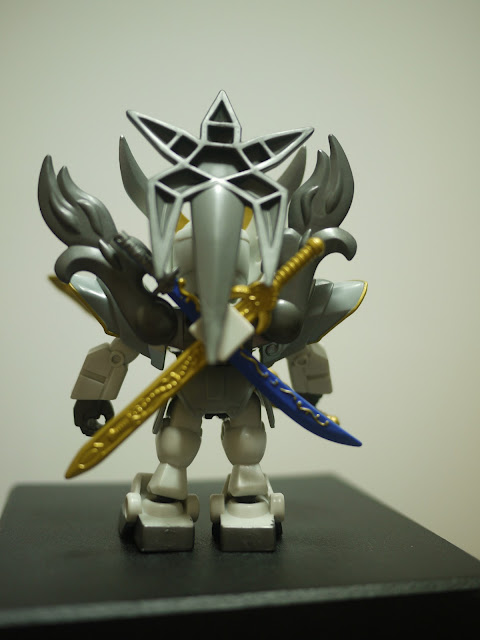 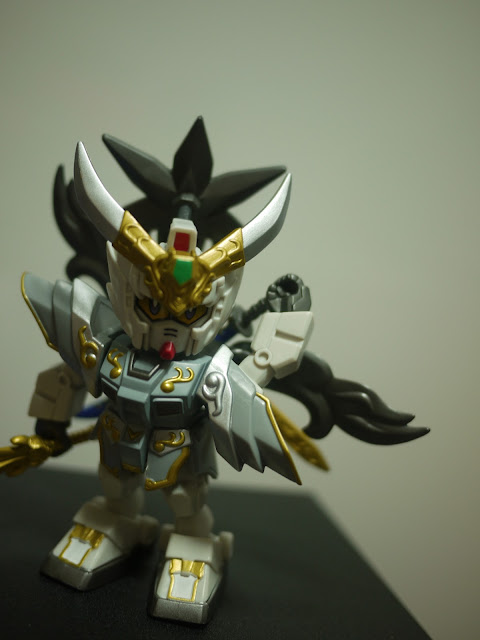 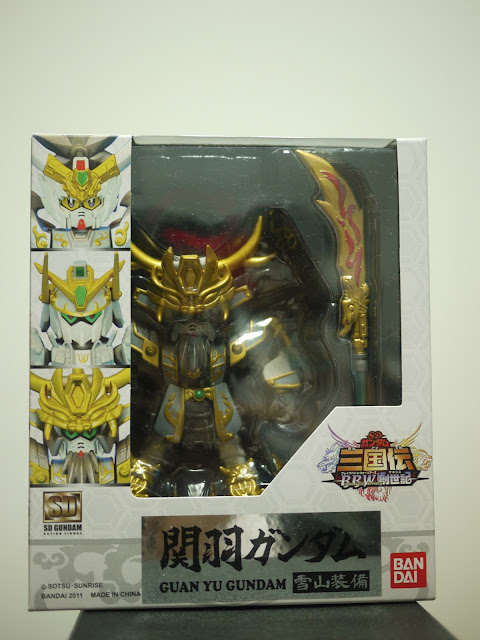 Hero of the demon beard. Calm and composed, bold and fearless, a man baring both propriety and valour. Also active as a strategy advisor. Even Sousou (Cao Cao) look to having him as a subordinate.
Under that Oni mask, a tragic past is concealed. Known as "Chousei (長生)" in the past. He lost to Ryofu (Lu Bu) in the fight to protect his village and as a result his village is burned down and the villagers are killed. His lover Rouran was killed too. After that he puts on the Oni mask and live to seek revenge from Ryofu (Lu Bu). That was until he met Ryuubi (Liu Bei), who made him rethink his actions. Later he became sworn brothers with Ryuubi (Liu Bei) and Chouhi (Zhang Fei). 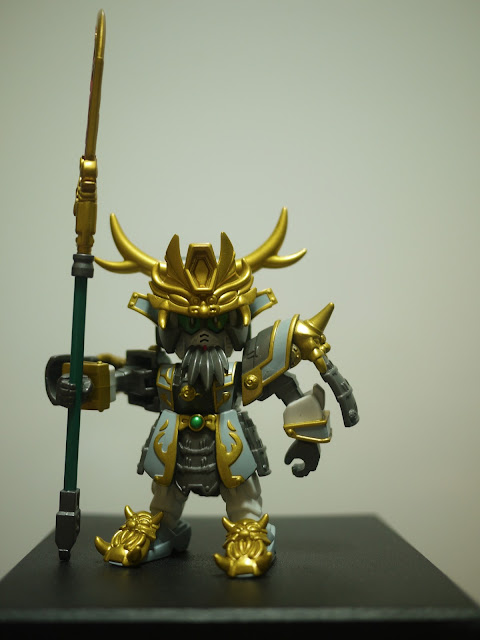 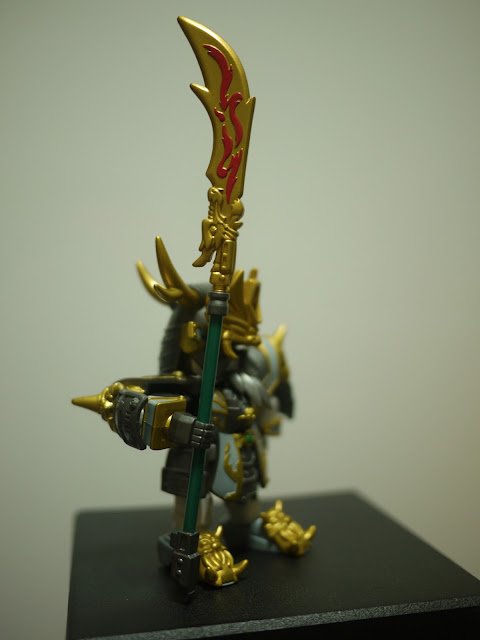 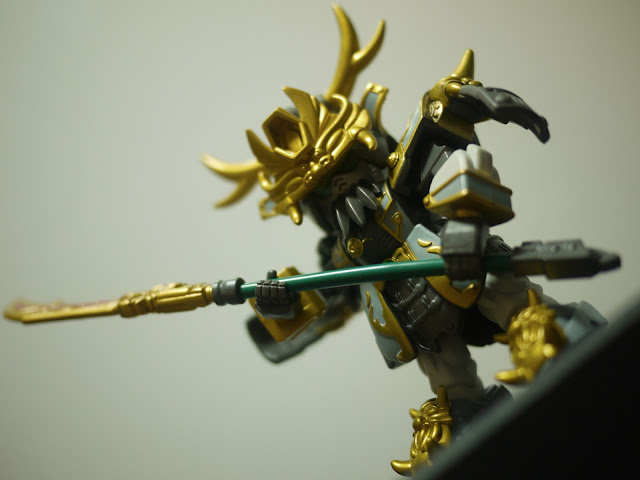 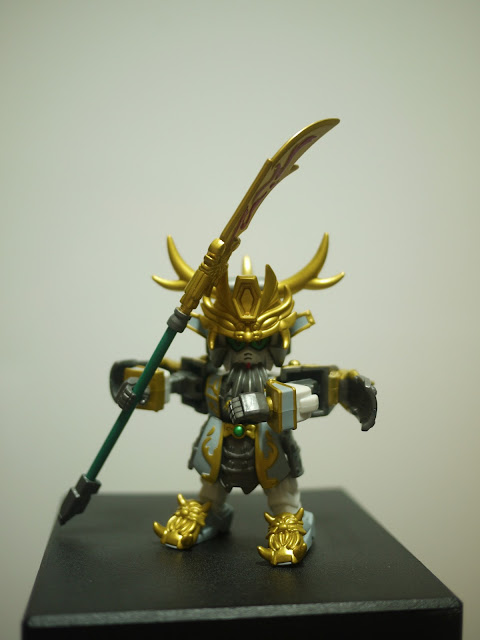 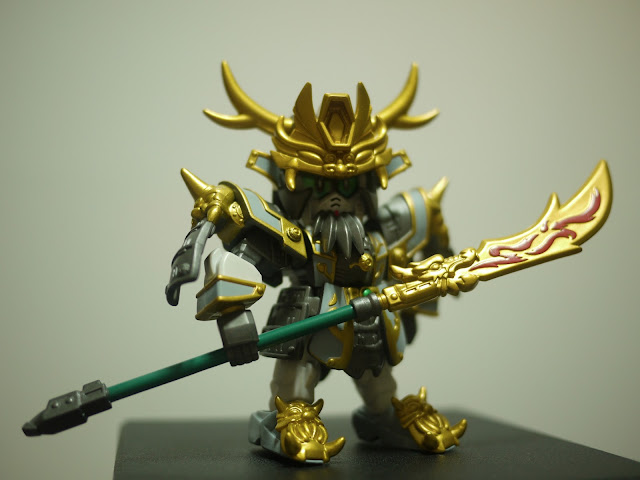 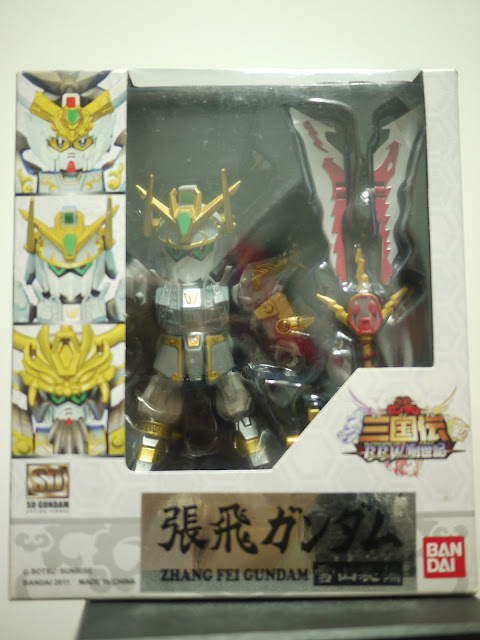 The unrivalled blade. A careless person who gets into quarrels easily, but also a man with an amiable, burning spirit. He may talk big at times but there is an emotional side to him too. He is taking care of war orphans.
He was once the man hailed as "the unrivaled blade", embracing his dream to become the strongest, he went to the capital. While he was gone the village was raided by the Yellow Scarves Troops led by the Chou Brothers in the rebellion of Totaku. Chouhi was devastated on the sight of the burning village and never talked about his dream and his past ever since then. The meeting with Ryuubi (Liu Bei) and Kan-u brought him back to his former self. Calls Ryuubi "aniki (big brother)" after they became sworn brothers.
In Gekitotsu hen, he travelled with Ryuubi (Liu Bei) to Keishuu to look for Koumei (Kong Ming), there he used Koumei's strategy to beat Sousou's troops.
After the Red Cliff battle, he went with the others to Ekishuu to form the country of Shou.
In the manga, Chouhi's shoulder armour is originally symmetrical until Ryofu Tallgeese slices off half of the right shoulder piece. The villagers later repair it in gratitude of his efforts, leading to the asymmetrical style seen in the Comic World story and model kit. 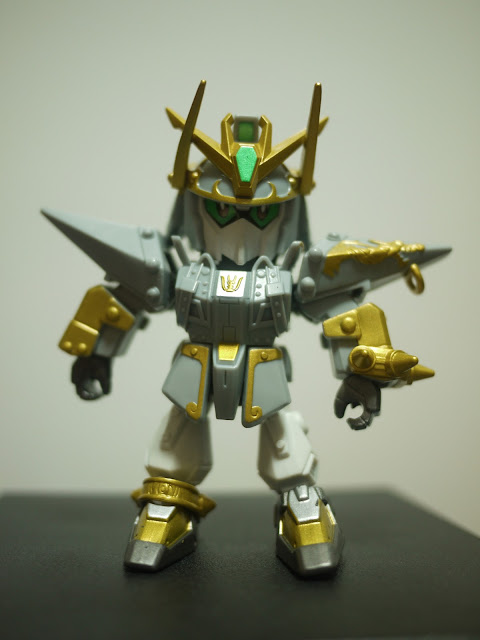 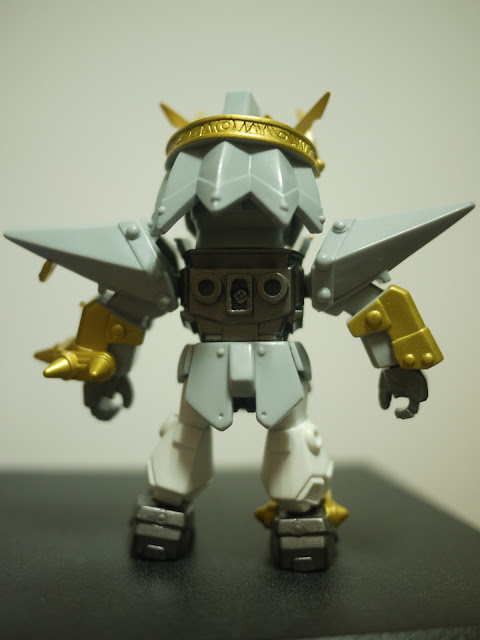 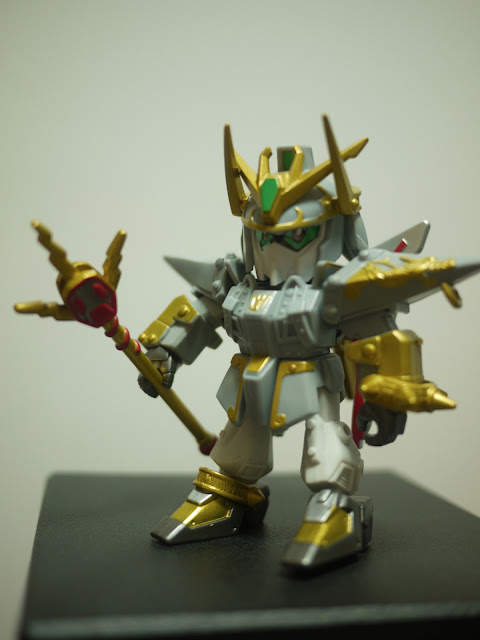 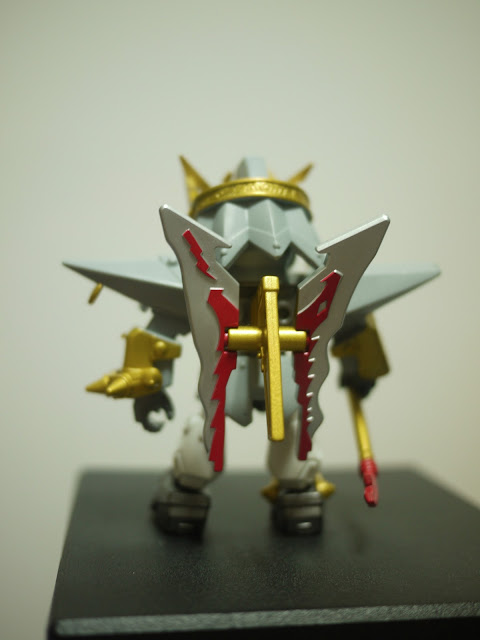 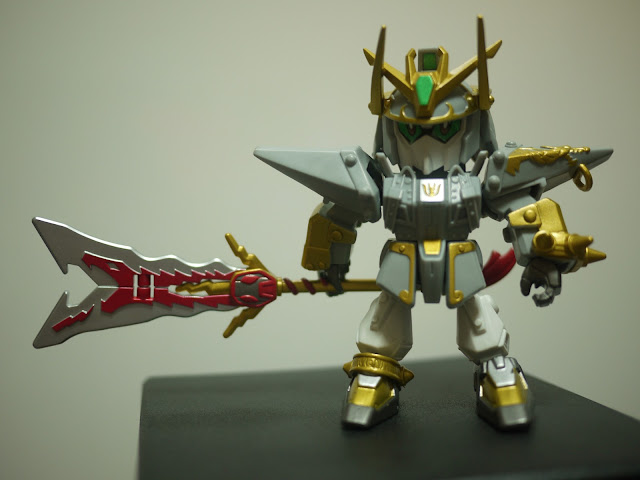 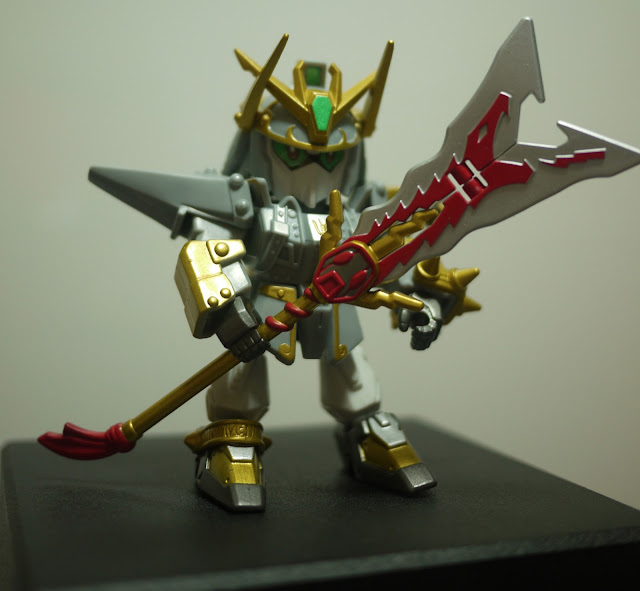 It was a pleasant surprise to open up and feel the quality of the SD Gundam. I didn't quite expect the ABS plastic use here as in (Mobile Suit in Action) MSIA. 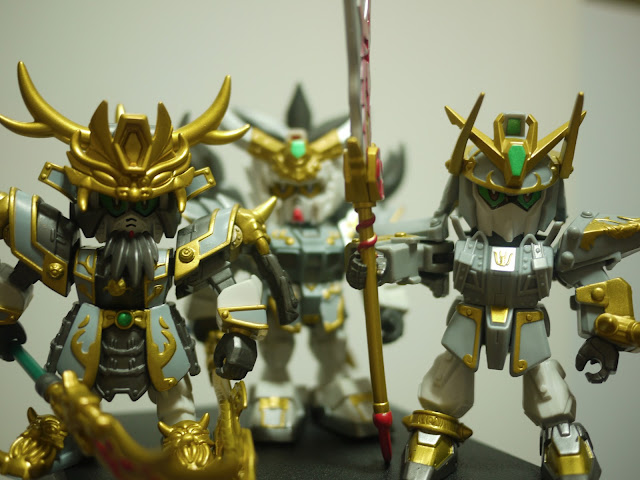 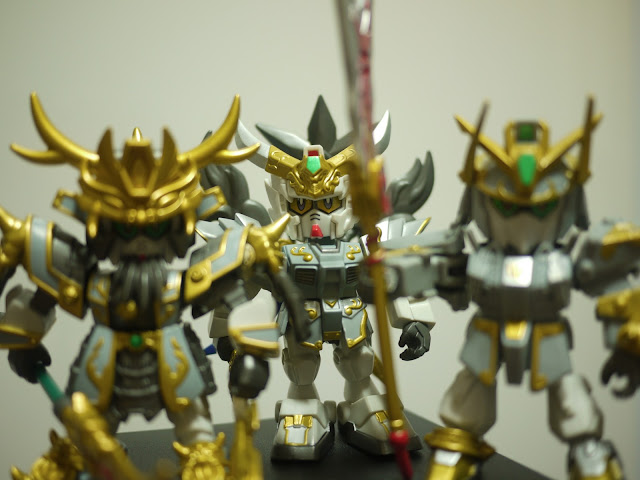