as I embarked on another Master Grade. I really did not see myself going through the torture after Unicorn. However, here I am again and I decided to do a better job. 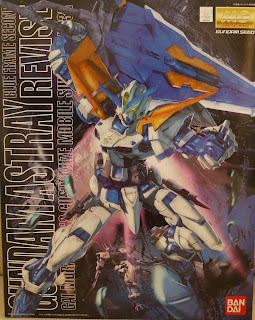 I chose the Blue Frame because of the color scheme and of course the huge sword (Red Frame do has the same weapon known as Tactical Arms II) which is what I like in a robot. 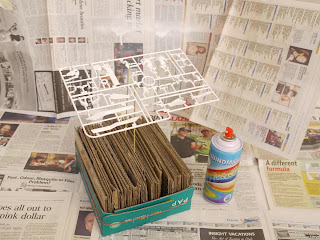 Have been reading around and picked up a few tips or two in building a Master Grade and decided to try out some. Here is a DIY spraying base (inspired by Shaun Wong) but I'm a little lazy here as I left the runners on.

This is my first attempt at spray painting a kit and indeed the quality of the kit looks so much better after a coat or two of paint. Well, still too early to say anything as they are still unassembled.

So starts my Day 1 after spraying and I spent about 1 hour plus to get the upper torso assembled. This time, I decided to pace my progress so I don't rush through.
Looking at the clock and it was already 1a.m. Called it a day.