as in Macross Frontier will be Brera Sterne's VF-27 Lucifer Valkyrie by Bandai. I had initially gave this a past due to space and expenditure issues. However, I am glad I got this after all. This has to be one of the best valks from the Macross Frontier series as Bandai has looked into the flaws from the previous valks and perfected them in this final valk from the series (although, Grace O'Connor custom will be released soon, it is essentially the same mould).

Packaging is somewhat the same but where is the display stand/base?? Bandai decided to pull a fast one on collectors this time by leaving the stand out and retailing it separately. I would have ordered one if it can be used to display all three modes (Shame on you; Bandai!) 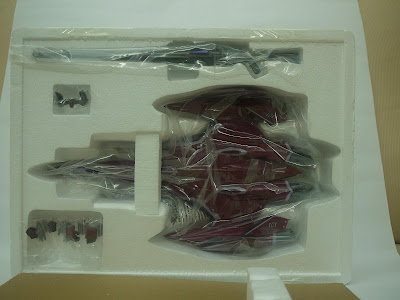 The styrofoam packaging is a standard for valks under this series and it does serve well in protecting this valks. This is very important especially for the VF-27 because there are many pointed edges and one will not appreciate a damage product upon unpacking.

The design is completely different from the rest of the VFs under this series but transformation is kept the same.

There are some smart improvement made susch as hidden clips built into the gun pod and under the valk for holding the gun pod in Fighter mode. However, it can be rather troublesome just to get the clip out under the valk.

One significant improvement is the Gerwalk mode of the VF-27. The VF-25s suffered weak connections joints at the back and requires a stand to hold it up. It can be very frustrating to get the Gerwalk mode displayed correctly. The VF-27 however, is exceptional when it comes to this mode and the bulk on the wings has little or no effect in terms of its CG. 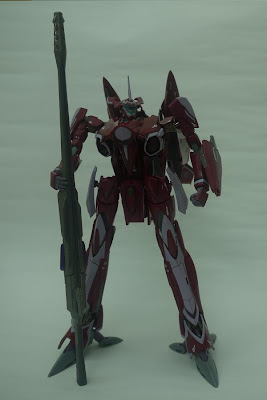 If you find Mikhail's sniper rifle huge, this beam gun pod is as massive as well. Great attentions to details were paid to the gun pod making it a very important piece of accessory for the VF-27. The standard publicity pose of the VF-27 holding the beam gun pod is easily achieved and it actually looks great without a stand.

Overall:
1. Get this if you want to complete your collection of Macross Frontier's valks
2. Get this and then foget about the Grace's Custom unless you want everything in completion
3. One of the best made valks under the Macross Frontier series, a MUST Get
4. No display stand........one can easily do without
If you have been waiting out for a better product say in the likes of Yamato's valkyrie; this is it. You can afford to have just one variant each of the VF-25s but you definitely need to have 1 VF-27.
Bottom line for the Macross Frontier line under Bandai: From Good to Great
Posted by Jonloh at 12:42 AM